FacebookTwitterInstagramPinterest
The History of Surveying Pt. 1
BACK
May 4, 2021

The History of Surveying Pt. 1 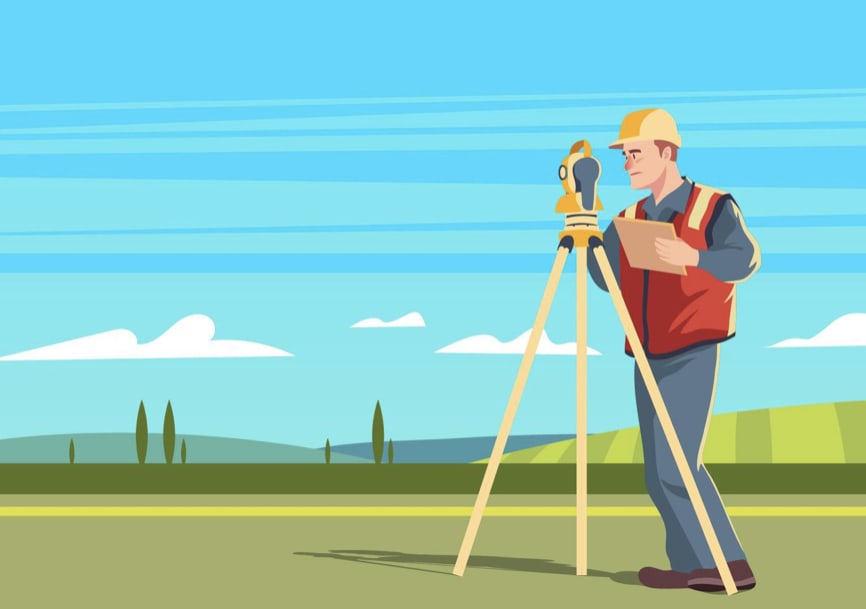 A Brief 3 Part History of the Craft of Land Surveying in the United States or Why George Washington went looking for an easier job.

When the United States of America was a gleam in the eyes of the Founding Fathers, the first problem encountered was how to finance the great adventure.  They had, metaphorically speaking, stuck their collective thumbs in the eye of the nation that boasted of the greatest Navy and the greatest Army known to the world.  This was going to be difficult, long, and expensive. What the Founding Fathers had going for them was; 1) an ocean, 2) lots of land, and 3) knowledge of the land.  What they lacked was financing.  Can’t afford it? Put it on the credit card – it will all work out, eventually (sound familiar?).  The problem was the credit card would not be invented for at least a century and a half. The next best thing was to print money (sound familiar?) – and print money they did.  The money of choice was the Continental Dollar. The Continental Dollar was backed by the full faith and credit of a nation to be invented later. Today, this action might be known as ‘check kiting’, but that, too, would be invented later.  The war dragged on, money was printed, vendors and soldiers government were paid, and the young country-to-be was awash in Continental Dollars. The occasional cash infusion from the French government and the occasional circulation of ‘personal’ currency helped the effort limp along. The average person in the street was quickly on to the game and the Continental Dollars were devalued as quickly as they were printed.  Eventually, nobody, but nobody, would honor Continental Dollars at their stated value – that is nobody but the nascent U.S. government. Therefore, the greatest real estate scam of our history took shape.

While General Washington and his band of soldiers slogged on and petitioned the congress for funding and support, a relatively small group of ‘patriots’ in the government supported the young nation-to-be by buying up large quantities of the Continental Dollars at pennies on the dollar.  This helped the war effort by taking the ‘Continentals’ out of circulation. At the same time the epithet, ‘not worth a Continental’ appeared in the American lexicon.

General Washington and his army and the ocean and the vast land area of the new United States of America prevailed and the war was won.  Washington promised many soldiers (many of German descent) land upon victory in the war. This was not the throwaway gesture that many thought.  The new United States of America was not out of the geopolitical woods quite yet. France, Spain, and the British were nibbling at the western, northern, and southern edges of the new nation.  Expansion was required for protection of the infant nation. Giving or selling land on the periphery of the new nation would raise money and provide a buffer of hearty people with an interest in self-preservation to insulate the new nation.  About 1,700 to 1,800 years earlier, Julius Caesar pulled the same trick by giving farmland around the town of Arles (made famous by Vincent van Gogh much, much later) in Gaul to retired legionnaires. Arles was the site of the southern-most bridge on the Rhone River and key to the Roman control of Gaul.  In doing this, he populated the area with a ready-made national guard of hardened professional soldiers (age 40+), all of whom had personal interest in defending their farms from foreign invaders. This grand gesture also moved the potentially unruly, dangerous mob out of Rome.

General, and soon to be President, Washington was very clever.  As is often the case, the ‘money men’ / ‘patriots’ were more clever.  Cart loads of ‘Continentals’ appeared at the Treasury offices of the only place on the continent where the ‘Continentals’ were traded at face value – the United States Treasury.  These next-to-worthless ‘Continentals’ were exchanged for vast tracts of land located beyond the Appalachian Mountains. Therefore, a rich merchant in Baltimore could now own 3,500 acres of potentially rich farmland in Kentucky or Ohio for as little as $420!  How could he secure what he owned?  How could he define what he owned? How could he monetize what he owned?  It is the same problem for anyone buying a house or a farm today. What is the mechanism of ownership and how is ownership defined, secured, and transferred?  Enter the craft of Surveying.

Part 1 of a 3 Part Article by Gilbert C. F. Brunnhoeffer, III  PhD, P.E., Ret. Roger Williams University, Bristol, Rhode Island Many thanks to our friend and guest blogger for this scholarly work.

Questions? Get In Touch!